Skip to content
View cart “Life on Mars – Digital” has been added to your cart.

Build the world…and then destroy it.

Published by Less Than Three Games
Distributed by Deernicorn Distro

In Downfall, you choose a Flaw you want to explore and build a unique and irredeemably broken world around it. You build your setting together, creating a rich physical and cultural landscape to destroy during play. If you enjoy world-building, you’ll love making a society in Downfall.  See how Greed destroys a city, how Loyalty corrupts a kingdom, or how Curiosity betrays a galactic empire. You’ll craft traditions that bring your society to life, then wn.

You take turns as each character in the game, so everyone is at the center of the fiction. The decisions you make throughout the game lead to a unique and memorable collapse of a civilization.
Even though you fail to save your world, the story you tell of its destruction will remain forever.

The game works in any kind of setting, from mythical fantasy to the real world to high-flying science fiction. It’s made to tell a whole story in a single 2-4 hour session and doesn’t require preparation, dice, or a GM. 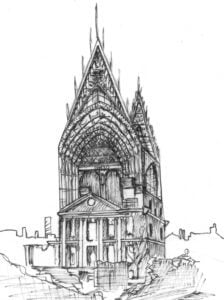