Add more playsets to Fiasco with these expansion packs.

All playsets include 54 cards each. 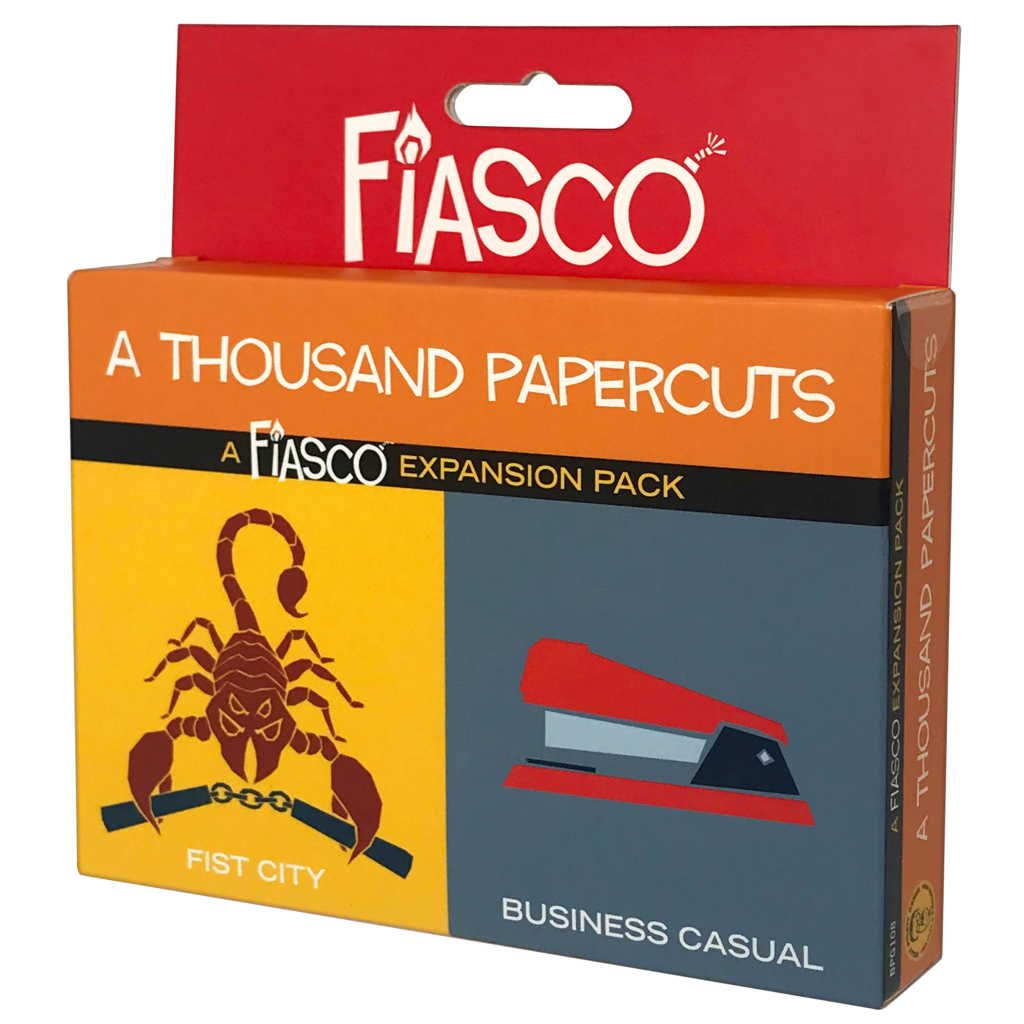 Life’s a grind. Sometimes you punch a clock, and sometimes you get punched. Either way, the struggle is real—endless hours pushing paperwork or pushing training mats, and one final showdown with a powerful boss…

Fist City
by James Mendez Hodes:
Among suburban America’s parking lots and strip malls, a secret community of martial pilgrims and sublime masters bows to no temporal authority, and disregards such mortal concerns as effectiveness, authenticity, racism, or taste. From the octagon to the lunchroom, will strength and skill alone prevail? Dare you walk the boulevard of broken boards? Fist City is about suburban America’s most mediocre martial artists and the epic, life-consuming rivalries between them.

Business Casual
by Steve Segedy:
Another day surrounded by the same cubicle walls under the same fluorescent lights, your mid-level manager shadowing your every step as you type out yet another mind-numbing report. But today’s the day it all changes, right? It’s time to stand up and tell them what you think, and either get that promotion or finally get out of this hell once and for all. Or maybe just burn it all down. 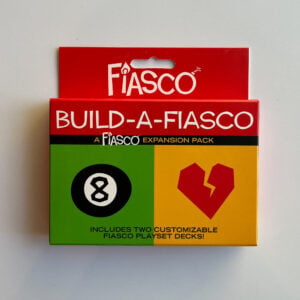 Two blank Fiasco playset decks of 54 cards each for building your own custom disasters.

Make your own disaster! Level up your Fiasco experience by authoring your own custom cards. This expansion includes two blank decks, everything you need to customize your favorite Playset or to build your own glorious Fiasco from the ground up. Add a little local color, tune it to your particularly questionable taste, or create something entirely new. 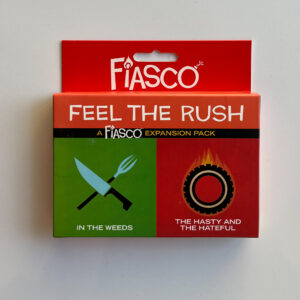 Food service staff and street racers compete for speed — will anyone win?

In the Weeds
By Jason Morningstar:
In The Weeds takes you into the seedy and off-kilter world of modern food service. You’ll work your ass off for not much money, but there are perks—repetitive stress injuries, abusive, drug-fueled bosses, and customers who don’t tip. Small change leads to big problems, though, and even if the stakes are low, the ambitions and staff are often stupidly high.

The Hasty & The Hateful
By Jason Morningstar:
We race for the same reason we breathe—it is life, the connection to the pavement is like our connection to family. What we do isn’t legal but we answer to the god of the stoplight and the nitrous injection. Some of us are dirtbags and some of us are millionaires, but on a quarter mile of two-lane the difference isn’t relevant. We race. We go fast. We do crimes. We are family. 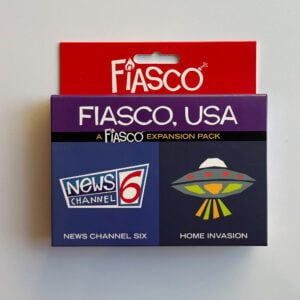 News Channel Six is in last place in a small market, and Action News Eleven is eating our lunch—sometimes literally. Those bastards are always one step ahead and we’re losing ground. This little town doesn’t have enough news for one station, much less two. Between our own in-fighting and some bad decisions from management, things are looking grim. Sometimes you need an angle, and make a little news yourself…

This is a nice neighborhood with a nice mix of families and a nice, powerful homeowners association. People who aren’t afraid to tell you that the shade of blue you’re painting your house isn’t allowed. Judgemental rich people. But lately things have been unsettled around Poppleton Terrace—property values are falling, crime is rising, long-time residents are grumbling, and now new people are moving in. People who are not like us. At all. 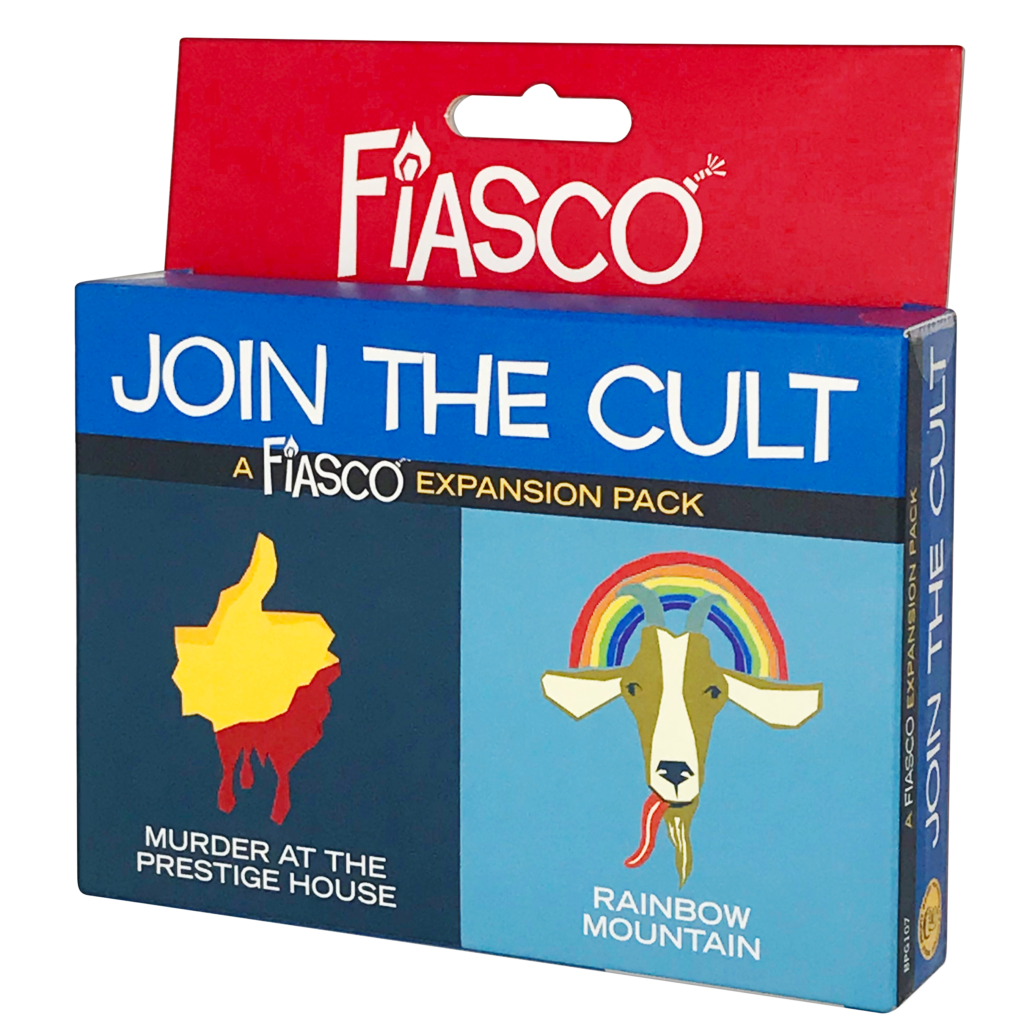 Rainbow Mountain
by Jason Morningstar:
Rainbow Mountain is more than a place—it is an idea. Called back to the land, escaping toxic cities and a diseased way of life, residents seek to build utopia on a few perfect acres of mountain land, far from the troubles of the modern world. Of course trouble has a way of sniffing out the fault lines of power, sex and ambition no matter where you go.

One Step Too Far 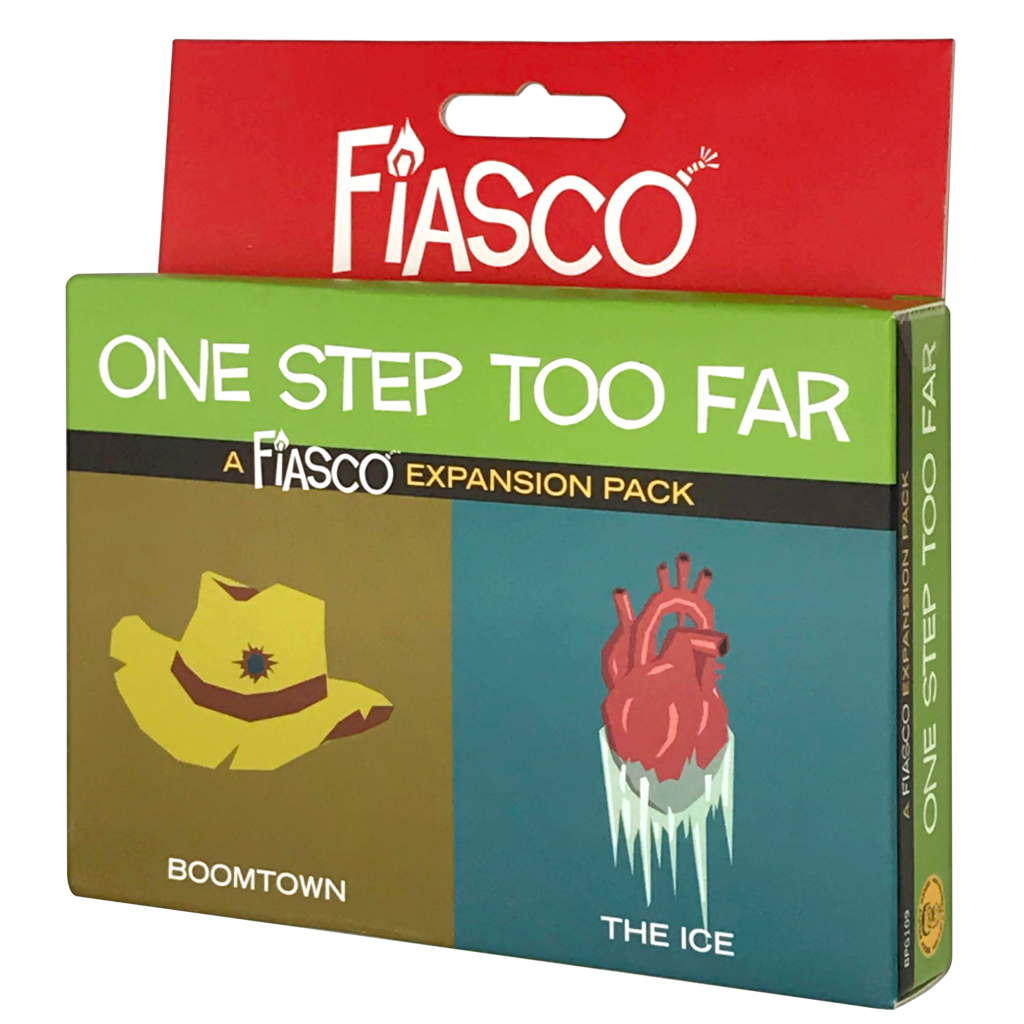 All the cool stuff happens on the edges of civilization. Inhospitable landscapes. Outlaws looking for big payoffs. That’s where you find people who don’t fit in anywhere else—the people headed for a fiasco!

The Ice
by Jason Morningstar

McMurdo Station is a slice of America transplanted to Antarctica, with all that entails—we’re here to do science, but we’re also doing each other—a lot—and we’re also doing crimes. Think of an isolated American mountain town and use your imagination. People get a little intense down here on the ice, and tend toward poor decisions, and sometimes it all goes wrong… 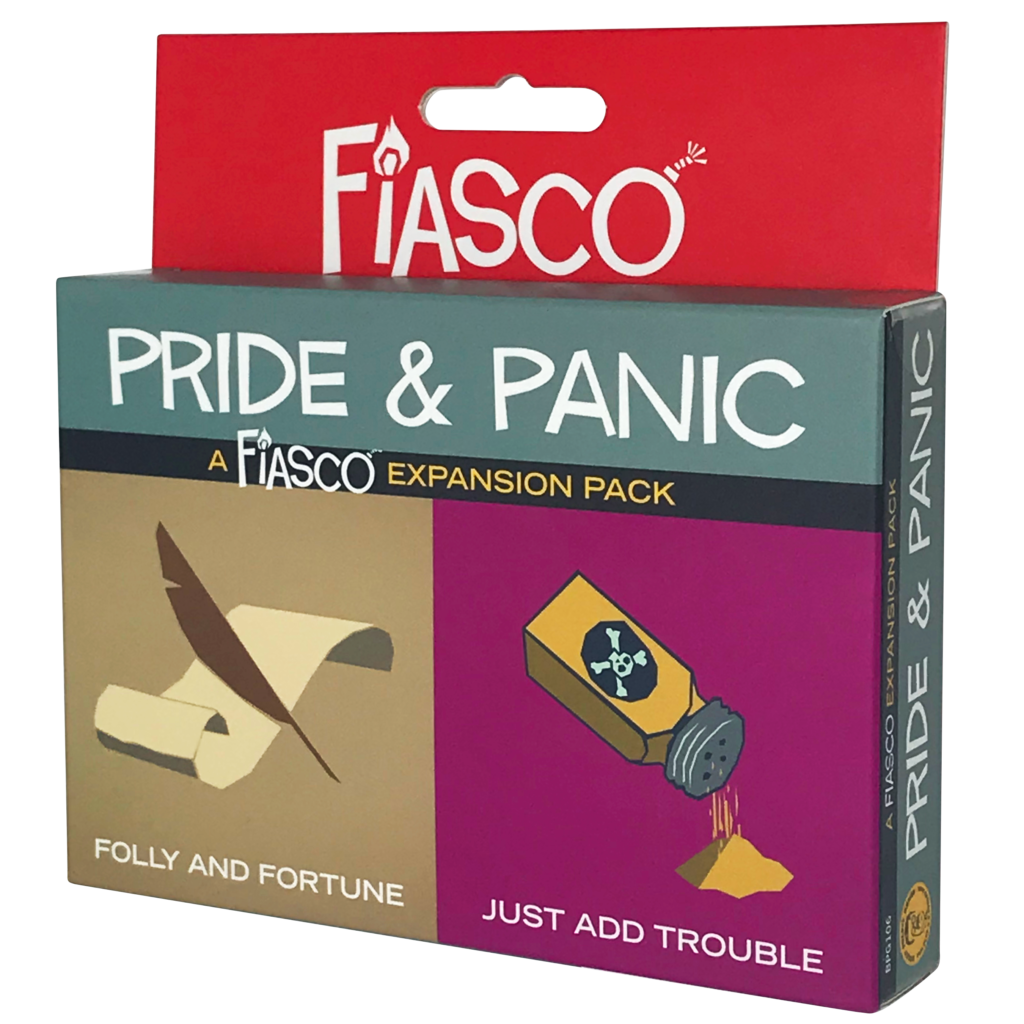 Fiasco at its most chaotic is often Fiasco at its best. Enjoy the buttoned-down tension of Regency England straight, or mix it up with one (or more!) extra flavors – time travel, the undead, or wildest of all – geese! These mini-playsets can be used with any playset deck.

Folly and Fortune
by Jenn Martin

In Regency England, one must always observe etiquette as one maneuvers the marriage market during the social season. The fortunate marry for love, but settling for an income or title is common consolation. Society papers can make or break one’s prospects and there are only so many eligible singles available. Waltz your way toward the aisle or duel away your differences – just make sure you do it before time runs out.

This deck is a collection of three mini-playsets, to be used with any playset deck to add some unexpected fun. Each includes some twists on the usual rules, including optional custom Tilt decks and event timer cards. 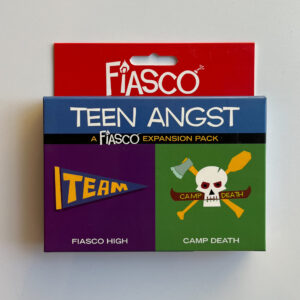 What’s more fun than high school? Many things, including summer camp, but Fiasco High is a special place full of bad decisions and worse athletes, while Camp Death is, well, Camp Death. Not everyone is going to make it home alive from either… This playset includes special rules for Camp Death, including four alternate outcomes that help you identify the killer among you!

High school, the best years of your life. Four years of learning and growth, gently guided by caring professionals. Or maybe four years of debauchery and mayhem, incoherently guided by your unhinged peers. Will you rise to greatness, or punch greatness right in the dick? Is there any other time in life to which “powerful ambition and poor impulse control” is a more apt summary?

So, here’s the deal. Camp Clearwater’s been abandoned since some grisly, “unsolved” murders 20 years ago. Or whatever. The new owner probably made that up as some creepy story to tell the campers and scare up business. What I know is that we’ve got a couple weeks to get this place set up before any campers arrive, and most of the hard work is already done. We’ve got enough booze, pot, and distance from authority to make this the greatest summer ever. What could go wrong? 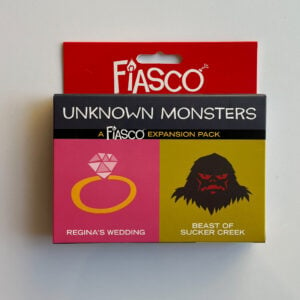 Wedding planners and mysterious beast hunters have a lot in common—the stakes are high and one wrong turn spells disaster, usually at the hands of a hideous man-ape that smells like a skunk and flips cars for fun. Combined, a Sucker Creek wedding is going to be one for the ages!

Wedding bells are ringing, and Regina is finally tying the knot. She’s found her soul mate, and the wedding is going to be a real event. Two big families, scads of bridesmaids, a metric kegload of groomsmen, a catered reception, the whole frilly white nine yards. Of course everyone has a past, and everyone has an agenda, and even the happiest occasion can become a social—and literal—battlefield.

The Beast of Sucker Creek

For hundreds of years, reports of blood-chilling cries in the night and occasional sightings of the Beast have been a fixture of local gossip. Is it a hoax? A crazed bear? Something strange and wholly new to science? No one knows, but those who have crossed paths with it are convinced of one thing—the Beast of Sucker Creek is real, and you don’t want to make it angry.